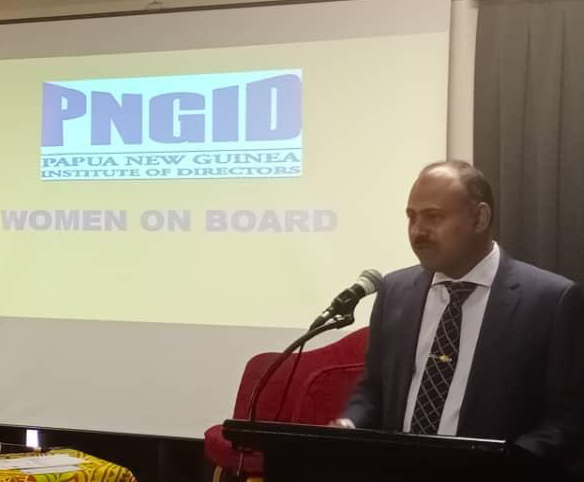 The Minister for State Enterprises, Mr Sasindran Muthuvel, and Australia’s Minister for International Development, Mr Alex Hawke, met this afternoon to discuss progress on the reform of PNG’s State-Owned Enterprises.

Minister Muthuvel said the reforms, part of the Marape Government’s Take Back PNG agenda, were progressing well, and gathering pace.

“The high-level Ministerial Committee and Technical Working Group, established after NEC agreed on SOE reform, has met a number of times,” he said. “There is strong support and assistance for the reforms I have initiated from Prime Minister James Marape and our fellow Ministers.”

“His appointment was made through an open-market, transparent and skills-based recruitment process. New executive appointments at KCH and other SOE’s are being conducted using the same process.”

“The appointments will strengthen the capacity of KCH generally and will also support the work of the recently-established Reform Program Unit to oversee obligations under NEC’s SOE reform agenda.”

“We will soon commence a review of the composition of SOE Boards, so that we get the correct mix of skills, experience and diversity specific to particular SOEs.”

“This review is driven by our desire for State-Owned Enterprises to have robust and transparent governance so they can make sound decisions, which will improve the delivery of reliable and affordable services to the people of Papua New Guinea.”

Minister Muthuvel said SOE reforms are a central part of Prime Minister Marape’s Take Back PNG agenda, and are supported and partly funded by the Australian Government and international institutions such as the Asian Development Bank.

“As in Australia, people had to have trust in state enterprises, which provide basic services and social and physical infrastructure,” Minister Muthuvel said.

“To restore public trust after years of political interference, mismanagement and waste, they must be accountable and transparent, which is the foundation of good governance.

“These institutions, if well managed, could make profound improvements to the well-being of Papua New Guineans, and to the nation’s business and consumer landscape through much better delivery of services.

“The entire SOE reform agenda is about improving service delivery, which will lift people’s quality of life across the country – serving our people by providing them the services they need and deserve.