The International Submarine Cable project linking Papua New Guinea, Solomon Islands and Australia is of great significance – one intended to boost connectivity, improve internet access and drive economic growth in the country. The Coral Sea Cable System (CS2) is estimated to be K331 (AU$ 136.6 million) and is being funded jointly by the Australia and PNG governments. The cable system, to be commissioned in November 2019, will link Port Moresby to Sydney and will increase the communications bandwidth capacity up to 20 Tb/sec, relieving the country of its dependence on ageing, congested infrastructure. Once this cable is live, the cost of internet access will reduce significantly – less reliance on expensive satellite connectivity.

The Government secured a loan from China’s EXIM Bank to fund the Domestic Submarine Cable network, estimated at US$ 270 million (K879 million) – the Government is putting forward 15% of the cost while the EXIM Bank loan covers for 85%.

DataCo, the wholesale arm of Kumul Telikom Holdings, is the implementing agency.

The project is intended to utilize approximately 5, 600 kilometres of submarine fibre optic cables to connect at least 15 coastal and maritime provincial centres across Papua New Guinea. The cable is manufactured in China and will be delivered to PNG by the end of October 2018. Laying of the cable will commence soon after delivery – it has already been tested at the factory in the presence of DataCo.

The submarine cable network will be constructed in two phases:

Phase II of the project will then see to the connection from Madang to Wewak, Vanimo and New Guinea Islands – this is anticipated to be completed by end of 2019.

The project is deemed to lower the cost of internet and increase access to reliable fast broadband services across the country.

PNG has also received an O3B satellite system capable of providing 6 GB/s of bandwidth to the country. This coincides with the APEC Leaders’ Summit and was funded through a grant, from Australia. 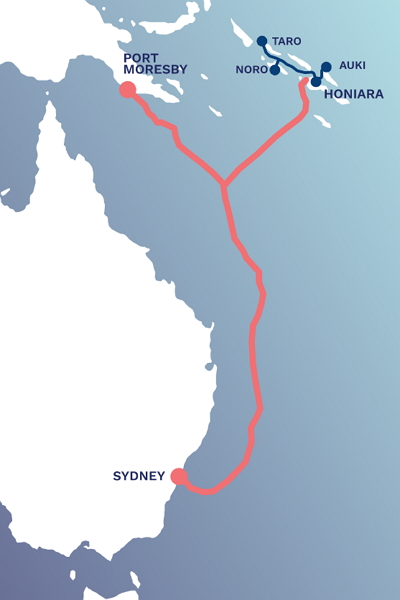 The Coral Sea Cable System (CS2) connects both Papua New Guinea (PNG) and the Solomon Islands to the major East Coast Internet Hub at Sydney, Australia. The Coral Sea Cable System (CS2) consists of 4 fibre pairs, with 2 fibre pairs from Sydney to Port Moresby and Honiara, respective capital cities of PNG and the Solomon Islands, yielding up to 20Tbps to each of the South Pacific countries.